It is now 3 years since the fatal fires in the East coast of Greece. According to the Hellenic Fire Service by 13:00 on 23 July 2018 until 26 July 2018 the fires destroyed the town of Kineta and the nearby town of Mati.

Some people thought that the blaze started from an electricity accident while others believed that it was a result of arson. Ultimately, police discovered a video tape that showed a 65-year-old man burning wood in his backyard. The strong winds and the high temperatures spread the fires in the nearby area very quickly leaving people with little time to react. 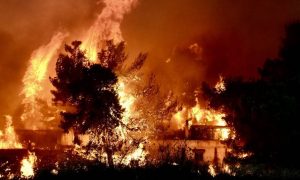 Mati on the day of the fire.

Many witnesses, including Vasiliki Kanelopoulou, described the horror they felt when they found themselves trapped amongst the fires. Most of them, like herself, run to the sea in order to survive. Some, however, were not as lucky. The day after the tragedy police came across a group of 26 people hugging each other in the middle of a field since they couldn't find a way out.

In the end, the fire left 102 people dead and more than 170 people injured and burned. The Hellenic Fire Service announced that the fire destroyed over 40.000 pine and olive trees along with 4.000 homes.

Before the disaster Mati was famous for its beautiful beaches, beach-side tavernas and cafes. Now in 2020 the people are trying to rebuild their lives while having the painful memories of the calamity in mind.